It is undeniable that the internet is an important system that has redefined our world. The ability to develop networks and allow devices to communicate is critical to modern day computer systems. This lab will take a look into the basics of computer networking and then examine networks through the perspective of a sysadmin.

We will be using web browsing as an analogy to understand the basics of networking. What exactly happens when I go web browsing for cat pictures?

But first let’s take a short dive into the details of networking.

Since the MAC address is unique this is often referred to as the physical address. The octets are often written in hexadecimal and delimited by colons. An example MAC address is 00:14:22:01:23:45. Note that the first 3 octets refer to the Organizationally Unique Identifier (OUI) which can help identify manufacturers. Fun fact – the 00:14:22 above is an OUI for Dell.

IP addresses are means of identifying devices connected to a network under Internet Protocol. There are two versions of the internet protocol, IPv4 and IPv6, that which differ on the size of their addresses. An example IPv6 address is 2001:0db8:85a3:0000:0000:8a2e:0370:7334 which is considerably longer than an IPv4 address like 127.0.0.1. For the sake of time we will only go over IPv4, but IPv6 is certainly gaining ground and worth checking out!

IPv4 addresses are 32 bits, i.e. 4 bytes, long and are delimited by a dot (.) every byte. An example IPv4 address is 127.0.0.1. Coincidentally this address is known as the loopback address which maps to the loopback interface on your own machine. This allows network applications to communicate with one another if they are running on the same machine, in this case your machine. But why 127.0.0.1 and not 127.0.0.0 or 127.0.0.2?

The answer is that 127.0.0.1 is simply convention, but technically any address in the network block 127.0.0.0/8 is a valid loopback address. But what exactly is a network block?

This diagram provides a visual breakdown of CIDR addressing 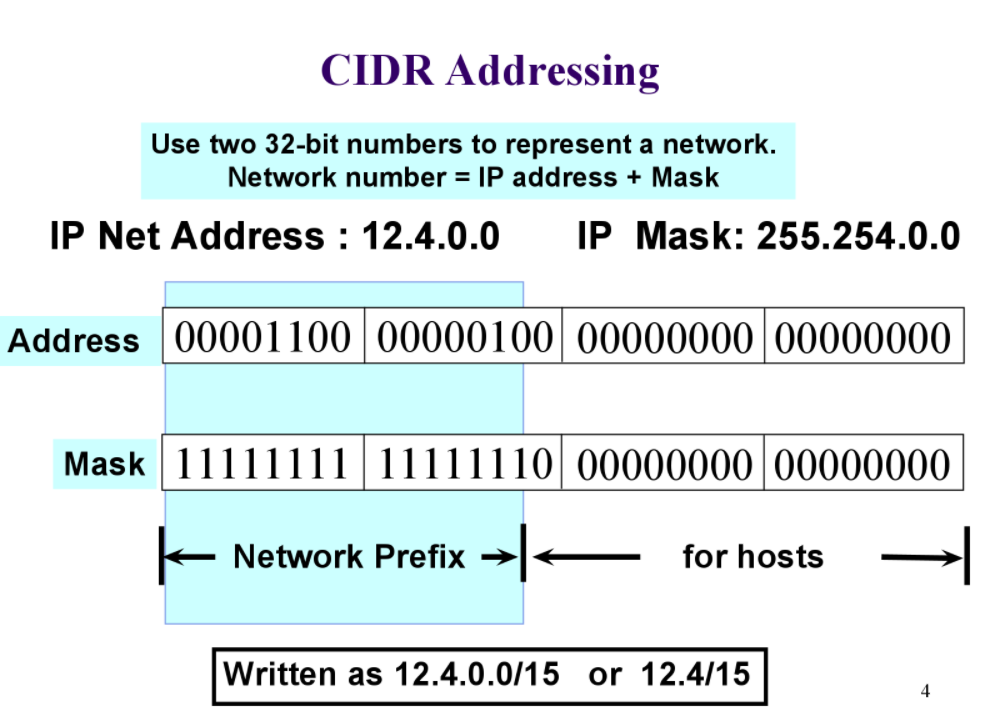 Address Resolution Protocol (ARP) is a protocol used to resolve IP addresses to MAC addresses. In order to understand ARP, we first discuss two ways to send a frame, unicast and broadcast. In the context of Layer 2, unicasting a frame means to send that frame to exactly one MAC address. On the other hand, broadcasting a frame by sending it to the broadcast address means the frame should be sent to every device on the network, effectively “flooding” the local network.

In order to route IP packets, devices have what is known as a routing table. Routing entries are stored in the routing table and they are essentially rules that tell the device how packets should be forwarded based on IP. A routing entry specifies a subnet and the interface that corresponds to that entry. The device chooses an entry with a subnet that is most specific to a given packet and forwards it out the interface on that entry.

Routing tables are usually to also have a default gateway. This serves as the default catch all for packets in the absence of a more specific matching entry.

Take this routing table for example.

We’ve gone over IP addresses and how they are means of communicating with a host over IP, but while IP addresses are machine friendly (computers love numbers) they aren’t exactly human friendly. It’s hard enough trying to remember phone numbers, memorizing 32 bit IP addresses isn’t going to be any easier.

But it’s much easier for us to remember names like www.google.com, www.facebook.com, or coolmath-games.com. So out of this conflict the Domain Name System (DNS) was born as a compromise between machine friendly IP addresses and human friendly domain names.

Now let’s flush out this black magic a bit…

DNS servers store data in the form of Resource Records (RR). Resource records are essentially a tuple of (name, value, type, TTL). While there are a wide variety of types of DNS Records the ones we are most concerned with are

Now we will transition into a discussion on the protocols at the transport layer. The two most well known protocols at this layer are Transmission Control Protocol (TCP) and User Datagram Protocol (UDP).

TCP is a stateful stream oriented protocol that ensures reliable transport. Reliable transport essentially guarantees that information arrives wholly intact and in order at the destination.

TCP is a connection oriented protocol which means it must first establish a connection before sending any data. This connection exchanges information that is the mechanisms TCP uses to provide reliable transport amongst other features. A TCP connection begins with something known as the TCP handshake.

The TCP handshake consists of setting certain flags in the TCP header of packets exchanged between sender and receiver. The sender initiating a TCP connection by first sending a SYN, a packet with the SYN flag set. The server acknowledges this connection request by sending back a SYN-ACK, a packet with both the SYN and ACK flags set. The client acknowledges this by sending one final ACK back to the server, and the connection is then established.

TCP then begins transmitting data and if it successfully arrives on the other end of the connection then an ACK is issued. Therefore if data is lost, reordered, or corrupted, TCP is capable of recognizing this and sends a request for retransmission of any lost data.

TCP also has a procedure to close connections. We only consider a graceful termination here, abrupt terminations have a different procedure we will not go over. If you’re interested, CS168 has some great material here. Let’s assume machine A wants to close its connection to machine B.

UDP is stateless connectionless protocol. UDP focuses on sending messages in datagrams. Being connectionless UDP also doesn’t incur the overhead of the TCP handshake and termination. UDP also makes no guarantees about reliable transport so messages may be corrupted, arrive out of order, or not arrive at all. For this reason UDP is sometimes called Unreliable Datagram Protocol.

While UDP makes no guarantees about reliable transport it doesn’t suffer from the overhead of establishing and closing connections like in TCP. UDP is therefore ideal for usage cases where we just want to send packets quickly and losing a few of those isn’t disastrous.

Moreover, compared to TCP each UDP datagram sent needs to be individually received. While for TCP you pass a stream of data that is transparently split into some number of sends and the data stream is transparently reconstructed as a whole on the other end.

Ports define a service endpoint, broadly speaking – ports mark a point of traffic ingress and egress. Whereas IP addresses connect hosts, ports connect process that run on such hosts. Only one process can be bound to a port at a time. Ports are represented by a 16 bit number meaning thus ranging from 0 to 65535. Ports from 0 to 1023 are well known ports, i.e. system ports. Using these ports usually has a stricter requirement. 1024 to 49151 are registered ports. IANA maintains the official list of well-known and registered ranges. The remaining ports from 49152 to 65535 are ephemeral ports which can be dynamically allocated for communication sessions on a per request basis.

Some port numbers for well known services are as follows:

As a sysadmin, trying to diagnose network issues can often be pretty challenging. Given the scale and complexity of networks, it’s tough trying to narrow down the scope of a problem to a point of failure. What follows is a list of commands/tools that can help with triaging problems. There are a lot of tools and we don’t expect you to memorize every single detail. However, it is important to know what tools exist and when to use them when problems inevitably arise. If you ever need more details the man pages for these commands are a great place to turn to for reference.

Tools also tend to overlap in functionality – for example there are multiple tools that can display interface information or test connectivity. When possible, it is a good idea to use multiple tools to cross-check one another.

Note that when it comes to real world networks there are even more factors to consider that we haven’t touched on like network security. For example, two machines can have a fully functioning connection but if one machine has been configured to drop all packets then it might seem as if they aren’t connected.

So take the output of these tools with a grain of salt, they a means of narrowing down issues. It is important not to misinterpret outputs or jump to conclusions too quickly.

Go to Gradescope for submission.